This experiment by Nat was done with a bunch of yellow roses that had already wilted slightly.  She divided them into three groups, A, B and C, and put each of these into different vases.

Vase A had a resin encased small quartz wrapped in copper inside the vase, and the vase was also put on an orgonite coaster.  Vase B was given flower food that came with the roses.  Vase C was the control, with no flower food or orgonite.

From left to right, these are vases A, B and C right after setting up the experiment: 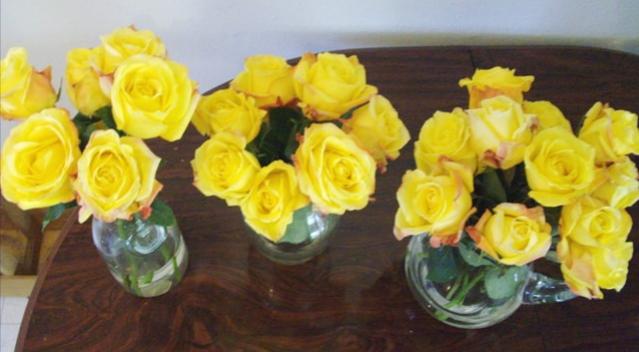 After 36 hours, Nat found that there was already a noticeable difference. While the roses in B and C are wilting, the orgonite-powered roses in Vase A have opened up and bloomed even more.

After 82 hours of the experiment, there is a striking difference between the roses in Vase A and the other two groups. These roses look fresh, healthy, and in full bloom, as if they were still on the rose bush:

After this, she decided to take vase C, the control vase with no orgonite or plant food, and transfer half of them to a new vase, vase D.  She put vase D on an orgonite coaster.

Here are vase C and D right after separating them: