An orgone device, or “orgonite” is a device which converts stagnant orgone energy (DOR) to positive, healthy orgone energy (POR). Orgonite contains a rough 50-50 ratio of organic and inorganic material. It also contains at least one quartz crystal, and often additional crystals. 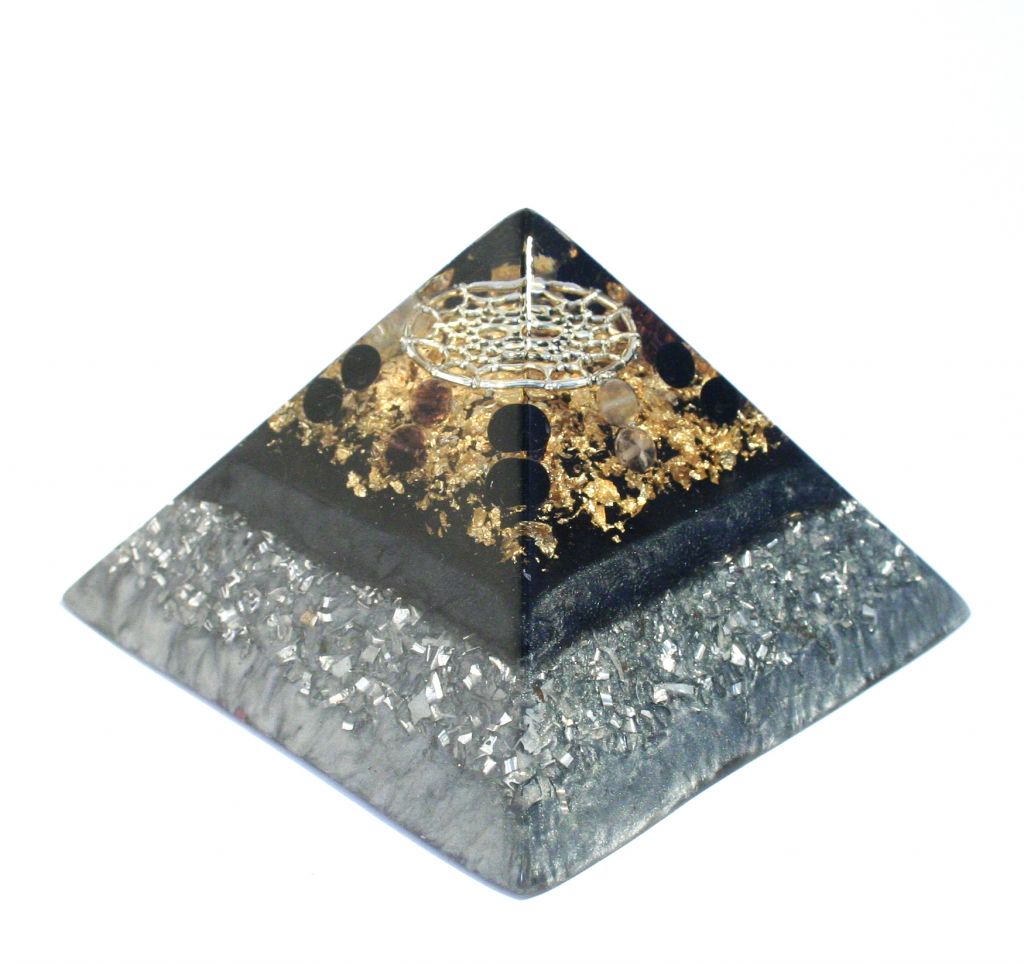 Organic material – The most commonly used material, and the material I use in my orgone devices, is polyester resin. It is not organic in the way that the word is commonly used, but organic in the chemical sense – i.e. it is carbon-based. Organic materials attract and hold orgone energy. Some people use epoxy or other resins, but polyester resin is generally preferred to most orgonite makers, because it shrinks when it cures, putting pressure on the crystal quartz (see more under “crystal” below)

Inorganic material – Metal shavings are used, often aluminium or copper as they are widely available. The higher the surface area is, i.e. the smaller the shavings, the more effective the orgonite is. Metals attract, then immediately repel orgone energy. Because the organic material attracts and holds orgone energy, and the metal repels it, a “scrubbing” action takes place, where the stagnant energy is being rapidly pushed and pulled back and forth, essentially cleaning it. The more metal an orgonite contains, the more effective it is, which is why orgonite makers recommend roughly 50% metal content. For more information on what metals are suitable in orgonite, see this article on metals in orgonite.

Crystal – The main crystal used in orgonite is crystal quartz, or any other crystal which has a piezoelectric effect. This means that when the crystal is put under pressure, it generates a small electric charge. Resin shrinks when it cures, so the quartz is constantly under pressure. It is not known exactly how the piezoelectric effect affects the orgone energy (although there are plenty of theories), but suffice to say, orgonite without quartz in it can in the long run become clogged up with DOR – the crystal is essential for the conversion of DOR to POR, otherwise the orgonite becomes merely an orgone accumulator.

Additional crystals – The orgone energy that orgonite releases is pure POR, positive but neutral. I like to add different crystals to  “flavour” the energy. For example, orgonite containing amethyst or lapis lazuli is good for all matters pertaining to spirituality and personal growth. For protection, I personally like to use onyx, fluorite and amethyst as secondary crystals in my orgonite protection pendants.

If you’re starting out making your own orgonite, you can find a longer list of all the ingredients you might need, as well as where to buy them in this article about orgonite-making supplies.

4 thoughts on “What is Orgonite Made of?”